Hernanes: “It was the saddest backflip of my career”

Cast-iron legends of British pop music Madness are set to release “Never Knew Your Name” as the second single from their beaming recent album Oui Oui, Si Si, Ja Ja, Da Da – and, on a morning when googling ‘Chelsea Madness’ returned a plethora of articles about Roberto Di Matteo’s sacking and the prompt installation of Rafael Benitez as his successor at Stamford Bridge, Football Burp was honoured to enjoy a ruddy good natter with the band’s drummer Daniel ‘Woody’ Woodgate on the subject of his beloved Blues…

So, quite a bit to talk about at the moment…

Oh my word, don’t get me going!

I’m afraid I must. Thoughts on Benitez, for starters?

I’m not a fan of his, to be honest, and personally I don’t know any Chelsea fan who is. I think, just in footballing terms, he’s had his day, and to most football supporters he made some fundamentally awful decisions. He was lucky to inherit the backbone of Gerard Houllier’s team and I think he went on to decimate it slowly but surely, didn’t develop it. I just think he’s a bloody awful manager. I’m grateful to our owner for all the great players he’s bought to Chelsea, but I think this is really foolish.

People are putting two and two together and suggesting he’s been chosen as a ploy to kickstart Fernando Torres. Do you buy that? Does Torres have anything left in him?

I don’t think Torres has got anything left in him. He’s lost his touch, he’s clumsy… Maybe it is an attitude thing, but I don’t think we can afford to build a team around one player. I went to the Norwich game and at one point I looked down and saw Azpilicueta, Ramires, Oscar, Hazard, Mata and Moses, all in the team, and the only two players left from the old side were Ashley Cole and Petr Cech. I thought, “How refreshing, and how brilliantly done by Di Matteo to give respect to the old players but slowly phase them out,” because clearly Chelsea have to be moving on. We lost 3-0 at Juventus the other night because of two deflections that no goalkeeper could have stopped, or any defence done any better with.

The third goal was a bit of a mess by Cech but it didn’t reflect the team – this is a new team going forward, and Torres didn’t even come into it. I think what Di Matteo did going five at the back was inspired, having two holding midfield players – okay, Mikel is a bit clunky and not very inventive, but he is very good at that job, and then Ramires who is a flair player – and then the three players at the front [Oscar, Mata and Hazard], oh my god! That’s the future, and to hand it all over to a manager who was brought in to inspire one player who cost £50m, it’s just nonsensical. I’m a passionate, passionate Chelsea fan so I’ve got to keep an open mind, just move on and hope that Rafa does a good job, but it’s a bit of a kick in the, er, lower part of the body.

So you think Di Matteo was hard done by?

I just feel so sorry for Di Matteo, and Eddie Newton. I do think he was hard done by because I don’t think his footballing decisions were bad at all. With that squad, who else would you have played, and how would you have played them? Unless Roman Abramovich has some knowledge of what’s going on in training that I don’t, sees the new formation and dynamics that I don’t…but I think most Chelsea fans were delighted with Di Matteo. So I do think he was hard done by, yeah – and all for one player! They’re getting the bloke who might inspire Torres.

Would you like to see Pep Guardiola coming in at the end of the season?

Guardiola is a great manager but again he can only work with the players he’s got, and this is a team that’s developing. Guardiola’s a footballing man so he’ll know about Chelsea’s history – if he’s going to build his team then he’s going to need more than half a season or a season to get it right, and I’m not so sure that Abramovich would give him that. We’ve heard it all before from Abramovich, “we’re going to give this manager time” and all that. Even with Andre Villas-Boas, whose man management was bloody awful to be fair, they said they’d give him time. Of course that went out the window once we started losing, and Guardiola’s an intelligent man so he knows that if he didn’t get it right straight away then he could be out of a job.

As a Chelsea fan it’s worrying – for once, we all thought we had a bit of stability, and although Di Matteo doesn’t have the pedigree, what is more important: pedigree or results? At the same time, I’m very grateful to our owner for what he’s done for Chelsea, so I can’t be seen to be slagging the man off. I just think it’s fair to say in this case that his judgement might not be quite right. Having said that, we don’t know what goes on inside the club, we don’t know who they’ve got lined up player-wise, they might have bigger plans…but, you know, why not just keep Di Matteo? If they think Benitez will inspire Torres, good luck!

You’ve mentioned the need for Chelsea to move on, so I take it you aren’t in favour of bringing Didier Drogba back, as is being rumoured. Or are you?

I dismiss the rumours, really. I think it would be a shame if they brought him back because he left on such a high. It’s like the punch-drunk boxer who comes back yet again to get beat up in the ring, it can be quite sad. It would be tragic if he came back and wasn’t the great Drogba of old. I think wanting him back is a knee-jerk reaction, but we need to move on. Also, I’m not sure how he’d fit into our current style. If he comes back, that really would piss Torres off!

Where did you watch the Champions League final, and how did you celebrate?

I watched it at home with one of my daughters. Even when Bayern Munich scored I had a feeling we’d win it – my daughter was in bits, but I just had a feeling it wasn’t over, as if our name was on the cup. When we got the equaliser I wasn’t at all surprised. It was meant to be. I didn’t do my usual crying act, though, like after the 1997 FA Cup final, winning it for the first time since 1970. That was one of the most emotional times I’ve ever had! (Laughs)

Would you be able to name the first, best and worst games you’ve ever been to?

The best is a real toss-up between the ’70s and today, really. I first got into Chelsea as my dad was an acquaintance of Charlie Cooke, and at around the age of 8 or 9 my brother and I went down to the training ground and met players like Osgood, Bonetti, Houseman, Hutchinson, Hollins, Webb, McCreadie, Dempsey, Harris – the whole lot, they were all there. They signed autographs and they were absolutely fantastic. We went to our first football match the next week and it was really quite surreal because we met up with the journalists Hugh McIlvanney and John Watts and some of the players before the game, for a drink would you believe! The one problem with this whole memory is that I don’t remember who the hell we were playing. (Laughs) The match itself has been overshadowed by the glamour before it!

Charlie Cooke said, “I’ll take the boys to the ground,” so we clambered into the back of his Jag and he drove us to Stamford Bridge. In those days – 1969, I think – the East Stand was covered, and the players’ car park was the other side of it, over by what is now known as the Matthew Harding Stand, along with old dog kennels and things like that. Anyway, he had to drive through the crowd to drop us at the East Stand then go and park his car. So that’s my most memorable game, but I can’t remember the score or who we played!

That was my first Chelsea game. The best…see, at that time Chelsea’s football was incredible – beautiful, flowing football, and there was so much more space than you get nowadays so it was a joy to watch. I still love watching it today when they show old games on Chelsea TV. Then you look at the modern day, the silky skills of Mata, Oscar, Hazard and Ramires, Cole bombing up the wing, Azpilicueta… They’re all absolutely wonderful players, so when we play that kind of football it reminds me of the ’70s, although it’s much quicker now, there’s a lot less space. Sometimes I watch Chelsea now and think “this is the kind of football I really love”, so we’re getting there.

See, I reckon my most memorable was the 1970 FA Cup and the 1971 Cup Winners’ Cup, but emotionally that’s matched by how chuffed I was when we won the FA Cup in 1997 because we’d been in the wilderness for years and we were finally ‘back’. The Champions League win was wonderful but, you know what, I wasn’t as moved by it – it didn’t have that kind of feeling of “thank god”. There are too many teams in it these days – it used to be if you won the European Cup or Cup Winners’ Cup that if you won it you really were the champions of Europe. The Champions League is too big nowadays, and it just doesn’t have it for me.

The worst would be a 0-0 draw against Barnet at Stamford Bridge in the ’80s. I can’t even remember who was in the side, but it was really, really dire. I think there were more throw-ins than passes that night. It was just the most awful game of football I think I’ve ever seen in my life. We beat them in the replay then got knocked out in the next round. It was a horrible atmosphere too around then, violence and hardly anyone there…and the football was bloody dreadful! It also looked like they were going to be selling Stamford Bridge at the time, so it was a pretty miserable. time for Chelsea.

Finally, if you had to select a five-a-side team out of all the Chelsea players you’ve ever seen, who would you pick?

Bonetti, Harris, Cooke, Mata – I love Frank Lampard dearly, but I love the silky skills of those two – and Peter Osgood up front. Although my mate who’s a Crystal Palace fan has just walked in and he’s going “Zaha!”. Or who? (Muffled background cry of “Victor Moses!”) Yeah yeah, very good. Very funny, ah ha ha.

Ska-pop legends Madness have announced that the second single to be released from their top-10 album Oui Oui, Si Si, Ja Ja, Da Da will be “Never Knew Your Name”, out on January 14th. For more information, please visit blog.madness.co.uk 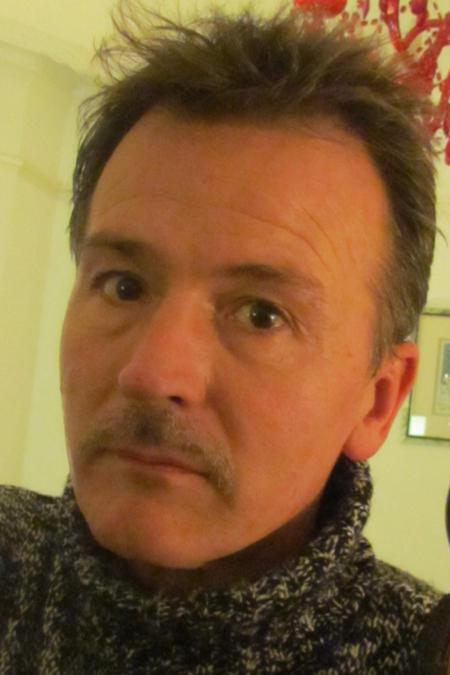 How on Earth can you do this 😠

The GFA must watch this and act accordingly pic.twitter.com/aRJ6Rv3hM3